Fort Ross was called home by an array of different cultures throughout the years. As a tribute to them, Fort Ross holds an annual cultural festival and it is coming up July 30th, from 10am-6:30pm. The event charges by car, not by person and this year there will be a $20 per car fee which includes the state parks fee of $8. This year's event will highlight the Kashia, Russian, Alaska Native, and California ranch era peoples that once lived in this amazing place.

The Kashia were the first people known to have lived in Fort Ross and many of them still live in the surrounding areas today. There is a group called the Su Nu Nu Shinal, which is made up of Kashia Pomo and Coast Miwok Indians from California who perform a traditional dance at the Festival. The dance takes place in a sacred dance circle that will be present at the festival. Also, the Russian House Kedry will bring Fort Ross to life with traditional Russian folk songs, dances, games, crafts and more! But wait....that's not all! The East Bay women's vocal arts ensemble called Kitka will be performing this year at the festival traditional songs from Eastern Europe. 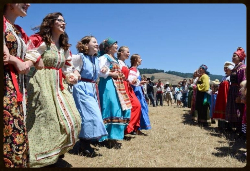 Throughout the history of Fort Ross, there is said to have been quite a few people from Russia who passed through or settled there. To honor these individuals and the cultural contributions they made to society St. Petersburg's Horn Orchestra of Russia will be performing 19th-century horn music from Imperial Russia. This music will be performed throughout the day from 10am-4pm while festival attendees participate in historic crafts, Alaska Native displays, and cooking demonstrations in the food compound. 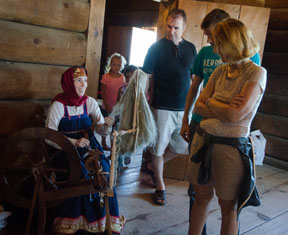 The arts and crafts will make you wonder where you should start! Fort Ross was one of the first industrial centers of California, and many skilled craftspeople were hard at work throughout the centuries. On Saturday you will be able to watch a blacksmith, tinsmith, weaver, spinner, felt maker, laundress, soap maker, carpenter, broom maker, and many others prepare their wares for market and you will be able to join in the fun to make candles, mini-baskets, and rope!

If you would like to join in the many cultures that have lived in this area for centuries come on out and join us for this year's Fort Ross Cultural Festival. If you would like to stay and make a permanent contribution to our cultural diversity here in West County call or text 707-217-1786 today!