Behind The Scenes With David Blomster Local Business Owner Of Pat's, Dick Blomsters, and Studio Blomster

Behind The Scenes With David Blomster Local Business Owner Of Pat's, Dick Blomsters, and Studio Blomster

David Blomster is a local business owner that happens to own one of the town's most beloved restaurants...Pats! He came to the Russian River to visit a friend and it didn't take him long before he decided to come out and open an art gallery called Studio Blomster. He would go on to open Dick Blomster's Korean Food which would become one of the most successful business on the Russian River and eventually buy out the town's most beloved Pat's Restaurant as well. He has recently opened a second Korean Restaurant in Santa Rosa and business is booming. 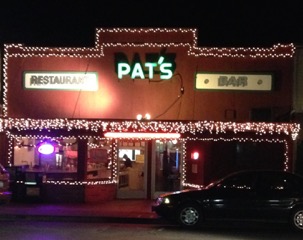 David was raised in Detroit and later moved to Las Angeles next to Korea Town. He grew up surrounded by an eclectic crowd with a passion for art and design. When the time came for him to leave home he adventurously took his seat at Otis College of Art and Design and began to make a name for himself. After college David headed out to Cal Poly to get his Masters in Design and his love of the arts began to flourish. Some time later he came for a visit to the Russian River to help out a friend and fell in love with the overwhelming beauty of the area. He decided to move to west county and settled in Sebastopol. After a year he decided to dive right into life here and in 2003 he bought his first home near pocket canyon. Aside from the art's and his entrepreneurship, David enjoys spending what little free time he has on the Russian River with his two small dogs going on hikes, or to the river. He also enjoys walking at Armstrong Woods and biking through the beautiful forest. David is also a member of the local Russian River Chamber of Commerce in addition to being a prominent local business owner.

"I know the area is changing but I feel a responsibility to preserve the history of the area...like Pats, when I bought it I tried to preserve it's history, same name, same look, many of the same employees, after all Pats has been here for more than 75 years!" ~David Blomster 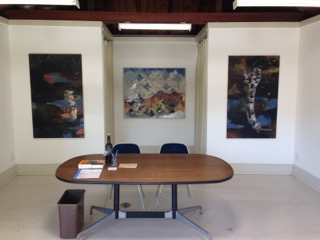 After years of interior design and graphic design work David became frustrated at creating art under the instruction of others. Intent on being able to express his creativity freely and show off the work of artists that he admired, he decided to open Studio Blomsters. This was his first move toward becoming a prominent local business owner on the Russian River. Seven years ago David opened the doors to Studio Blomsters and made beautiful art easily accessible to the general public. This art gallery would serve to be quite different from other studios in the area because not only would it feature the local art, but it would also bring National and International artists to the area to display their art and serve to help expand the views of the locals here on the Russian River. 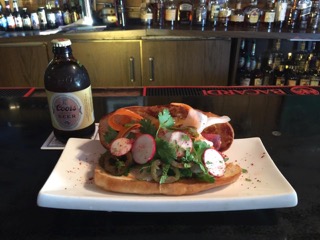 David drew on his upbringing and seeing a need for a delicious Korean restaurant he decided that it was time to take the plunge and open his first restaurant. When David decided to open Dick Blomster's Korean restaurant here in Guerneville he wanted to have it moonlight in the back room of Pat's and the Bar, with permission from the owners he soon made his dream a reality. David says Dick Blomsters is a "playful combination of American and Korean Food," featuring everything from rice and noodle bowls and lettuce wraps, which are traditional Korean, to a more American burger with seaweed, fried pickles, and mac & cheese with short ribs. This eclectic postmodern mix of delicious food would be nearly impossible without David's head chef Nick Pepper who has been with him for 3 years creating works of art in the kitchen. 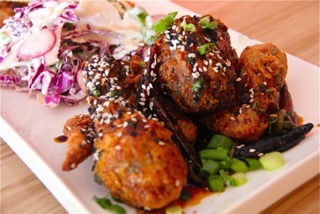 David has a soft spot for any cause or charity that is happening on the Russian River which is another reason he is a prominent local business owner. Dick Blomsters and the bar is actually very community oriented having made donations to local charities often over the years. There is a game that they play with visitors in the bar which is that if you throw a dollar up with a tack and it sticks to the ceiling you can get a dollar off your drink. When the ceiling gets full of dollar bills David takes them to donate to a cause such as El Molino School and Guerneville School. 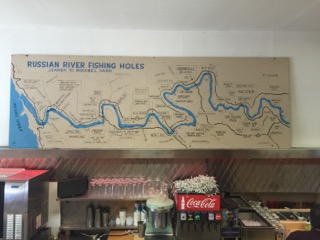 Pat's Restaurant is known as the go-to place for breakfast and lunch. They serve a very traditional country breakfast and many of the locals can be found there first thing in the morning for coffee, as well as on their lunch break. After a year of having his very own restaurant here on the Russian River, this local business owner decided to take another risk and buy Pat's Restaurant that had been on and off the market for a few years. The transaction closed escrow on New Year's Eve and David had become the proud owner of yet another business here on the Russian River. That is not the end of the story though...David went on to open another Dick Blomster's Korean restaurant in Santa Rosa and has dreams of expanding in the not too distant future!

"The Russian River is full of incredible beauty, delicious wine, great food, along with a compassionate and generous community...and we have art!!!"~David Blomster 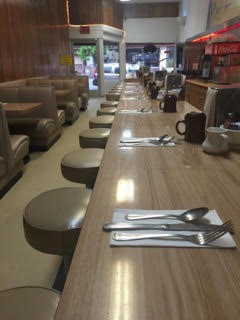