Cazadero is a quaint little village west of Monte Rio along the Russian River. It is home to Magic Mountain, Austin Creek,  and King Ridge which host some of the most spectacular views in all of Sonoma County. Aside from the natural beauty found in Cazadero, there are also a few things that this small town is known for including Camp Cazadero and Raymond's Bakery. Homes for sale in Cazadero are always in high demand due to the spectacular views of rolling hills, Austin Creek and the stunning redwoods. The population of Cazadero is roughly 354 lending to the small town feeling and privacy. Cazadero is rich with history and is home to the Cazadero Performing Arts Camp nick named Camp Caz by the locals. Cazadero is located twenty minutes from Guerneville and fifteen minutes from the awe-inspiring Pacific Coast. Homes for sale in Cazadero are eclectic and vary in size, shape and amenities. They also vary in price depending on where in Cazadero they are located. Homes for sale on Austin Creek, King Ridge, and Magic Mountain tend to be on the higher end due to the creek front and sweeping landscape views. Property in Cazadero range in price, style and amenities and are often valued based on their views, privacy, and whether or not they are creek front. If you have been thinking of investing in Cazadero Real Estate call or text 707-217-1786 today! 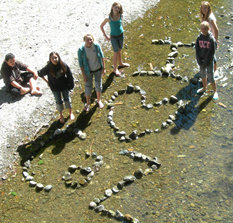 Cazadero has the areas best performing arts campgrounds amusingly nicknamed by the locals as Camp Caz! In 1957 a Berkeley High School band director Bob Lutt established Camp Caz as a place where children and adults alike could go to explore their musical and performance abilities. Camp Caz is open to the community and offers open mic, crafts, swimming, classes in dance, drama, writing, and music. Camp Caz is the areas best performing arts campgrounds and is looked fondly upon by the locals as a place where they spent many summers as a child. 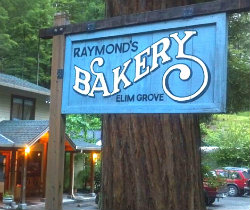 Raymond's bakery is the best restaurant in Cazadero. Friday evenings in Cazadero offer local mostly organic pizza, drinks, and live music. The rest of the time Raymond's prides itself on using organic ingredients whenever possible as well as taking their award winning bread and pastries to the local farmers market!  They also have a B&B if you are visiting the area and wish to stay over night. The restaurant at CazSonoma Inn is open from May through Thanksgiving every year as well. Their menu consists of exquisite gourmet dishes and changes daily so that you are always surprised by what is to come. Their Strawberry shortcake is one of my favorite desserts although, the chocolate delight is delicious as well! If you have been out exploring West Sonoma County you may be tired and feeling the need to curl up in your pajamas and watch a movie instead of going out to dinner. If this is the case try visiting the Cazadero General Store where you can pick up some organic food items, including Harris Ranch steaks and chicken, and rent a movie to watch at home. The Cazadero General Store is over 100 years old and reflects that with it's vintage style and log cabin design.  The owners are friendly and welcoming to everyone who comes to visit the shop and have an encouraging word for anyone who is feeling down on their luck. 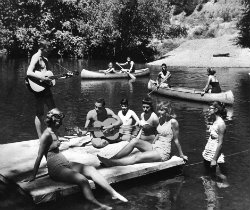 Cazadero is rich with history going back to 1856 when a pioneer settler named Henry Austin settled near the mouth of the creek essentially naming the creek Austin Creek. This breathtaking creek in Cazadero follows a sinuous path through the trees of the canyon emptying into the Russian River near Duncan's Mills. Cazadero Highway runs straight through town to its junction with Highway 116 which was originally the North Pacific Coast Railroad track that connected Cazadero with Duncan's Mills. The North Pacific Coast Railroad was essential to the logging industry hauling massive amounts of timber out of the Russian River area to Healdsburg and Santa Rosa in order to expand and build the cities, as well as being fundamental in the town's tourist industry because it transported vacationers from San Francisco to the Russian River area. The town was a private hunting resort called "Ingrams" that was owned by Silas Deras Ingram in 1869.

Through it's growth Silas was able to negotiate getting a post office for his resort in 1881 giving it a town status however, the Federal government named the post office Austin after the creek. Silas, angered by this turn of events, launched an considerable amount of negotiation and political persuasion until he managed to convince the North Pacific Coast Railroad to extend its rail line from Duncan's Mills to Ingrams, the town that would now honor his surname. Silas ended up moving to what is known today as Howard but he kept his ranch in Cazadero which still exists and is known as "Lions Head Ranch." Silas died on that ranch on June 8, 1900. 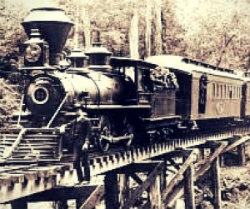 In 1888 George Simpson Montgomery, a wealthy businessman from San Francisco bought the town and renamed it Cazadero, which is the Spanish word meaning "The Hunting Place." George was known to be an exclusive member of the notorious Bohemian Club and a two fisted drinking member at that! In 1890 he became a "Born Again" Christian and tried to regulate the town with restrictive covenants (CC&Rs), but there were to many bootleg stills hidden in Cazadero to counter him. The CC&R's strictly forbid any card or dice playing, gambling, drinking, and doing any business without his permission and paying him a business tax! January 14, 1894 is when the Austin Creek Train Tragedy took place, which is known as Cazadero's darkest hour. A liquor party run to Duncan's Mills on a dark and stormy night ended when the train tried to cross the storm weakened trestle at Elim Grove. The trestle broke and the train plunged into Austin Creek claiming the lives of seven men. Since then the railroad has given way and Cazadero Highway has taken its place. The town was made public property and the community has grown strong and having learned from their mistakes, they don't mix alcohol with trips across the creek in the middle of the night. 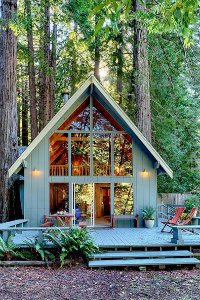 Austin Creek is one of the areas most beautiful creeks. Austin Creek is home to steel head trout and used to have freshwater shrimp before they ended up on the endangered species list. The primary reason for this was the dams that people build years ago that created the most gorgeous swimming holes in Sonoma County. The shrimp unfortunately did not handle the dams or the excess swimmers well and eventually began to die off. Not wanting to lose any of the wildlife local government decided not to allow dams to be built. The creek originates in an isolated area known as The Cedars about thirteen miles west of Healdsburg. In 1885 the North Pacific Coast Railroad extended its narrow gauge line up Austin Creek to transport lumber from Cazadero to the south. That railroad was eventually converted into what is known today as Cazadero Highway.

Perched perfectly overlooking Kidd Creek, this is the place to stop and breath in the great outdoors. Easy layout and thoughtful outdoor space compliment this cool creeks...

Nestled among the redwoods of Cazadero, near beautiful Austin Creek, awaits this enchanting retreat. Feel the stresses of the day immediately begin to melt away as you ap...

Less than one mile down Austin Creek road sits this adorable Cazadero cabin that was elevated and updated in 2005. Made in the shade of some beautiful redwood trees this ...

Welcome home to your Happy Place. Come on in and relax in this wonderful country style home. Property features include a beautiful great room with vaulted ceilings, skyl...

Discover the magic of Magic Mountain in Cazadero! This darling Russian River Valley retreat is nestled in majestic redwoods on 4.22 sunny acres with soaring views. Sprawl...

Significant price reduction on this 3 bedroom, 2 bath, 2,022 square foot log home with spectacular views in every direction. 40 unspoiled acres in the coastal hills with ...

Please do not go without agent! This is your opportunity to build! This majestic piece of property is 1.08 +- acres of broad hillside on Magic Mountain in the redwoods of... 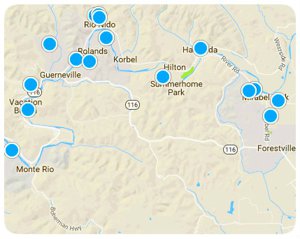